This House Won Building Of The Year Award By Archdaily

Meet Casa Cabo de Vila, a house built on a hilltop in Paredes, a municipality in Portugals Porto district, that won Building of the Year Award by Archdaily. Its organic shape was inspired by the idea of movement rather than emphasising a sense of stability.

As a result, it won Building of the Year Award, and its fully decorated with Laskasas pieces, so we believe its worth taking a peek.

The architects at Spaceworkers conceived the house as a delightful adornment for the lush natural surroundings.

It features a gorgeous fluid shape. The layout of the house could be described as a square whose corners have been pulled outwards.

The concrete structure is made up of two extensive, thick horizontal parts. They are squashed together to create the base and the roof.

The space between the two features one floor containing all the rooms. A spacious living room and kitchen, three bedrooms and bathrooms and a garage.

You may also like: New Collection Designing Purposeful Connections

The imaginary movement between the parts is reflected in the continuous glass and wood facades. Sliding walls that open the interior space up wide to the exterior. It reflects why this house won the Building of the Year Award.

Casa Cabo de Vilas layout seems to want to stretch over the ground as if it had no real borders but yearned to take in the nature, the ground and the forests stretching into the distance.

The great weight of the roof is supported by concrete walls and pillars which run through to the interior. As a result, it creates an unrestricted layout and a semi-structured space.

A minimal number of walls sketch out the floor plan of the house. Framed by light, moveable glass and wood surfaces. Instead of being shut off or permanently excluded from the exterior, the interior space seems poised to reach outwards.

The first level of this Building of the Year Award-winning house is created by the huge solid base which matches the floor plan in size and lifts the house up from the ground. A second level is formed by the concrete casts. It extends out from the house towards the two entrances, one pedestrian and one vehicular, both of them leading downwards.

The way in which the perimeter expands outwards pierces the concrete at its core, forming an opening in the block which is given over to nature once again.

The entire layout of this Building of the Year Award winner rotates around the central feature. An open glass patio that recreates a fragment of the nature surrounding the whole house.

The interior of the building is no less stunning than its architecture. Filled with Laskasas pieces, meet all the divisions of this remarkable family home:

This dining room is a truly multi-functional space. Designed to be more than a place to sit and have dinner. As a result, is also an entertainment room for guests. 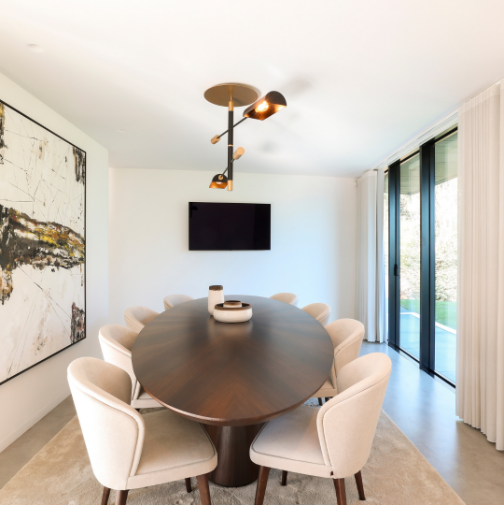 The home office speaks to those who need comfort and style to greater creativity. The simple wooden desk and the ergonomic leather chair create the perfect place to escape the urban world and to get things done.

The bed with integrated bedside tables and the lighting fixtures create a glamour that makes a statement.

Bulding of the Year Award  Bedroom

ROUND UP: 6 Strange Interior Design Requests